I’ve never lived with cats. Pop culture taught me that they’re all aloof and do their own thing. Videos like “Cat-Friend vs Dog-Friend” only strengthened my  pre-conceived notions.

I met Rosa the Cat last week at Alaqua Animal Refuge. She was super outgoing. Quite the flirt, followed me everywhere. Rosa was even trained to “hug” on command, and I was lucky to catch it on video. 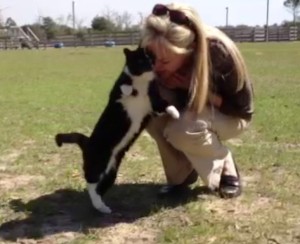 My initial reaction was, “Rosa is awesome — she’s so smart and outgoing, just like a dog!”

Then the little voice in the back of my head said, “Yo, dude. Cats are individuals, too. Rosa is an awesome cat because Rosa is awesome — not because she’s like a dog.”

Sometimes I think people suspect we’re blowing smoke up their bums by saying “Dogs are individuals,” especially since it’s usually said by pit bull dog advocates and accompanied by images of pit bull dogs, and only pit bull dogs.

But really, this applies to all dogs. And all cats. And all humans. Why? Because animals are individuals.