We’ve talked to nearly 600 New York City dog owners through our project, “Dogs of New York.” Sometimes we meet dogs that go to work alongside their owners.

Here are 7 “working dogs” we met on the job. 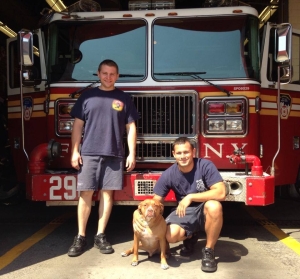 Red lives at a fire station in East New York, Brooklyn. For the past 6 years Red has worked as the station’s mascot. “The police found him running around the projects and thought he might be a vicious dog. They brought him here and we decided to keep him.” 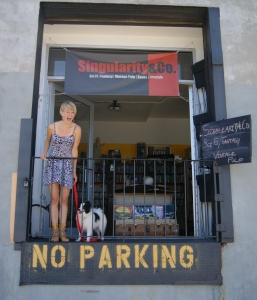 Robot works alongside his owner at the Singularity & Co bookstore in Dumbo, Brooklyn. “Robot comes to work almost every day. He walks all the way from Greenpoint!” 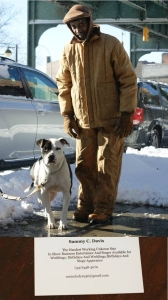 Jack and his owner, Sammy C. Davis (“The Hardest Working Unknown Star”), lives in Bushwick, Brooklyn. “He’s a celebrity. I bring him on stage with me when I sing. Everybody knows Jack.” You might also recognize Sammy C. Davis from the New York City subways: he’s on the official roster of musicians. 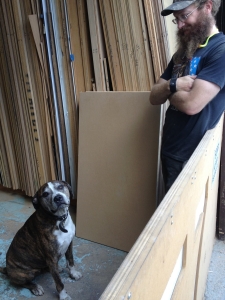 Jojo is an 11 year old dog I met while visiting DHWWD, a custom design and cabinetry store in Williamsburg, Brooklyn. “I’ve had him since he was this small,” his owner said, holding out his palm. “He was going to be the guard dog, but….” 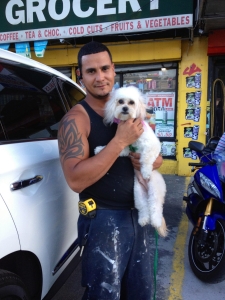 Pinky keeps her owner company at a tire shop in Bushwick, Brooklyn. While Pinky is totally comfortable working with the guys as they get down and dirty, she always wears her pink bandana to complement her good looks. 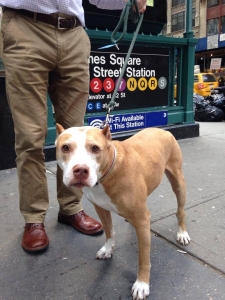 Cyrus is a 9 year old dog I met in Times Square. “We live uptown, but he comes to the office with me.” “He walks like an eggbeater sometimes, but he’s been that way since he was a puppy.” “I’ve never had a dog live past 10. I hope Cyrus is the one who does.” 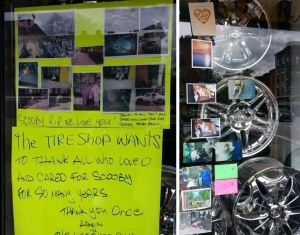 Though we never had the pleasure of meeting Scooby, this tribute to his life shows how many people loved him. Rest in peace, Scooby.

“Dogs of New York” is a project of Beyond Breed. Want to meet more? Visit our Facebook page at: https://www.facebook.com/dogsofnewyork.org.

We believe that the human-canine bond should be available to everyone, regardless of where they live, how much money they have, or their ability to access pet care services. To bridge that gap in our own Brooklyn community, we share resources with pet owners in need through our “Ruff Riders” project: www.beyondbreed.com/ruff-riders.

To make a donation to support our “Ruff Riders” families visit: www.beyondbreed.com/donate.