I’m starting a new feature called “Motley Musings” — an assortment of news, views, and other items that made me stop and think. It’s a collection of things that have challenged my existing views, introduced me to new perspectives, and influenced how I view animal welfare, community outreach, and social justice. I plan to share “Motley Musings” on a regular basis. Enjoy! 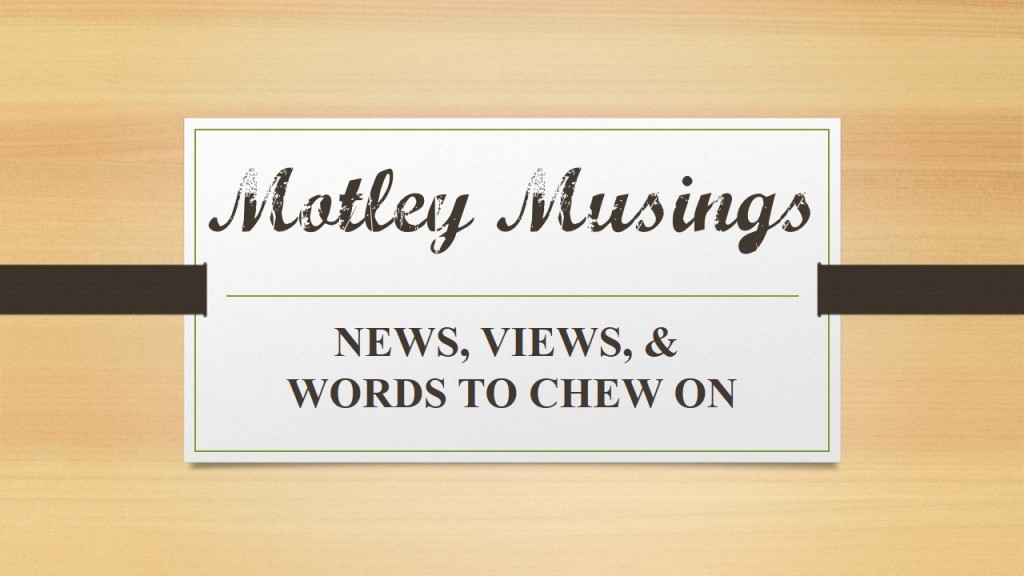 (1) Connecting the Dots: “I realized that as well-intentioned as all that work was, it was leading me to a place of relatively narrow thinking. That I wasn’t connecting the dots between other kinds of social injustices that are occurring here in the United States and abroad to the work that I was committed to and the cause that I had been committed to over the years.” – Legal Scholar and Author Michelle Alexander, in a Bill Moyers segment titled “Incarceration Nation”, December 2013

(3) Stereotypes, Spin, and Language: “I understand the power of words, the dangers that come with stereotypes. But I also refuse to spin the truth to make outsiders feel more comfortable.” – Photographer Chris Arnade, in a comment on his Facebook post titled “On Language”, posted on 12-28-2013

(4) Ethnocentrism and Dangerous Binaries: “All the silly stuff of life doesn’t disappear just because you’re black and live in a poorer country. Here’s a ‘First World problem’: The inability to see that others are as fully complex and as keen on technology and pleasure as you are.” – Nigerian Novelist Teju Cole, quoted in Ben Sack’s article, “First World Problem’s Third World Dilemma,” The Berkeley Beacon, November 2013

(5) Truth, Moral Reasoning, and Frustration: “If you think that moral reasoning is something we do to figure out the truth, you’ll be constantly frustrated by how foolish, biased, and illogical people become when they disagree with you. But if you think about moral reasoning as a skill we humans evolved to further our social agendas — to justify our own actions and to defend the teams we belong to — then things will make a lot more sense. Keep your eye on the intuitions, and don’t take people’s moral arguments at face value. They’re mostly post hoc constructions made up on the fly, crafted to advance one or more strategic objectives.” – Social Psychologist Jonathan Haidt in his book, The Righteous Mind, published March 2012

(7) Celebrating Equality and Ignoring Inequality: “I believe that same-sex marriage bans are teetering not just because they are constitutionally unsustainable but because enough white, straight, well-off Americans finally came to realize the countless ties that bind them to gay and lesbian Americans. But at precisely the same moment  in our history, voter suppression efforts prove that those same white, well-off Americans are losing sight of the countless ties that once bound them to poor and minority citizens. We celebrate burgeoning equality—and then we ignore sprawling inequality.” – Legal Journalist Andrew Cohen, “If I Need ID to Buy Cough Syrup, Why Shouldn’t I Need ID to Vote?”, The Atlantic, December 2013

(8) Fear and Separation: “We live so close, yet so far away. Fear has been our separator.” – Maurice White, from the album ‘Faces’ by Earth Wind and Fire, released October 1980

(9) Humility, Good Press, and Bad Press: “I want you to stay humble. I want you to always stay true to yourself. If you read the good press and believe it, you’re gonna have to believe the bad stuff.” – Film Director John Waters to Ricki Lake, on the set of “Hairspray,” as quoted in VH1 “Celebreality Interview”, May 2009

(10) Context Matters: “His performance was arranged by The Washington Post as an experiment in context, perception and priorities — as well as an unblinking assessment of public taste: In a banal setting at an inconvenient time, would beauty transcend?” – Gene Weingarten, “Pearls Before Breakfast”, The Washington Post, April 2007