Nobody Wants Them…Or So We Thought

One of the challenges facing pit bull dogs is the assumption that “nobody wants them.” Another is the idea that being labeled as a “pit bull” means automatically excluding dogs from certain interactions with other dogs, or that pit bull dogs all require “special homes.”

This article is about Spindletop, the ‘sanctuary’ from which hundreds of pit bull dogs were rescued through a large-scale animal cruelty investigation. Some of the dogs were sent to Spindletop because of these assumptions.

Animal Farm Foundation and HSUS shared some valuable feedback from their experiences helping with the Spindletop case, both on the ground with the dogs and behind the scenes with the people who sent them there. 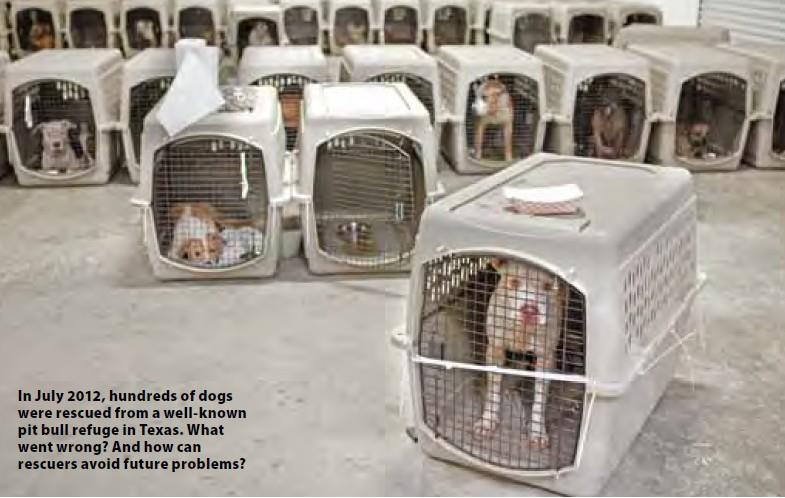 “Given Spindletop’s reputation for taking “difficult” dogs, they went into the site expecting to deal with placement challenges. They were surprised by how many dogs were “just lovely,” said Stacey Coleman, Executive Director of Animal Farm Foundation.

“What we found out as we went along is that many people took dogs to Spindletop because they assumed there was a problem with the dog,” she says, recalling one man who’d found a female pit and been told it would be unwise to keep her since he had another female dog at home. “So he did the ‘right’ thing and found the dog a place at Spindletop. He never let the two dogs meet because he’d been told not to.”

“It suggests an ongoing problem with people making assumptions about dogs who’ve been labeled pit bulls,” she says. “We need to look at the dogs in front of us, and not the dogs we were warned about.”

“The single most important thing we’ve learned from this is that this notion that it’s difficult to place pit bull dogs or to find rescues or shelters to help is maybe not as accurate as we thought. Because here we had 300 dogs, and in about six weeks, all but 18 of the dogs had a place to go. That’s phenomenal.”