The Cronuts and Spay/Neuter Craze

Every day in Manhattan, a line forms outside the Dominique Ansel Bakery in SoHo. People come to get a taste of New York City’s latest craze: “cronuts,” a cross between a croissant and a donut.

The bakery doesn’t open until 8:00 am, but cronuts sell out quickly. It’s best to get in line by 6:00 am for a chance at one. The “cronut craze” has been covered by most major media outlets, who are fascinated by the lengths people go to for a taste.

But cronuts aren’t the only thing New Yorkers are craving.

Every day in locations throughout New York City, lines form outside the mobile spay/neuter clinics. People come to have their pets spayed or neutered at subsidized rates, ranging from $0 to $125.

Just like the bakery, the clinic doesn’t open until 8:00 am. And just like cronuts, surgery spots sell out quickly.

But if you want your pet to be spayed/neutered, you should get in line by 5:00 am — a full hour before the cronutters assemble in SoHo. And unlike cronuts, the “spay/neuter craze” has not been covered by any media outlets, despite the incredible lengths people go to for their pets.

I met some of these people last Saturday. 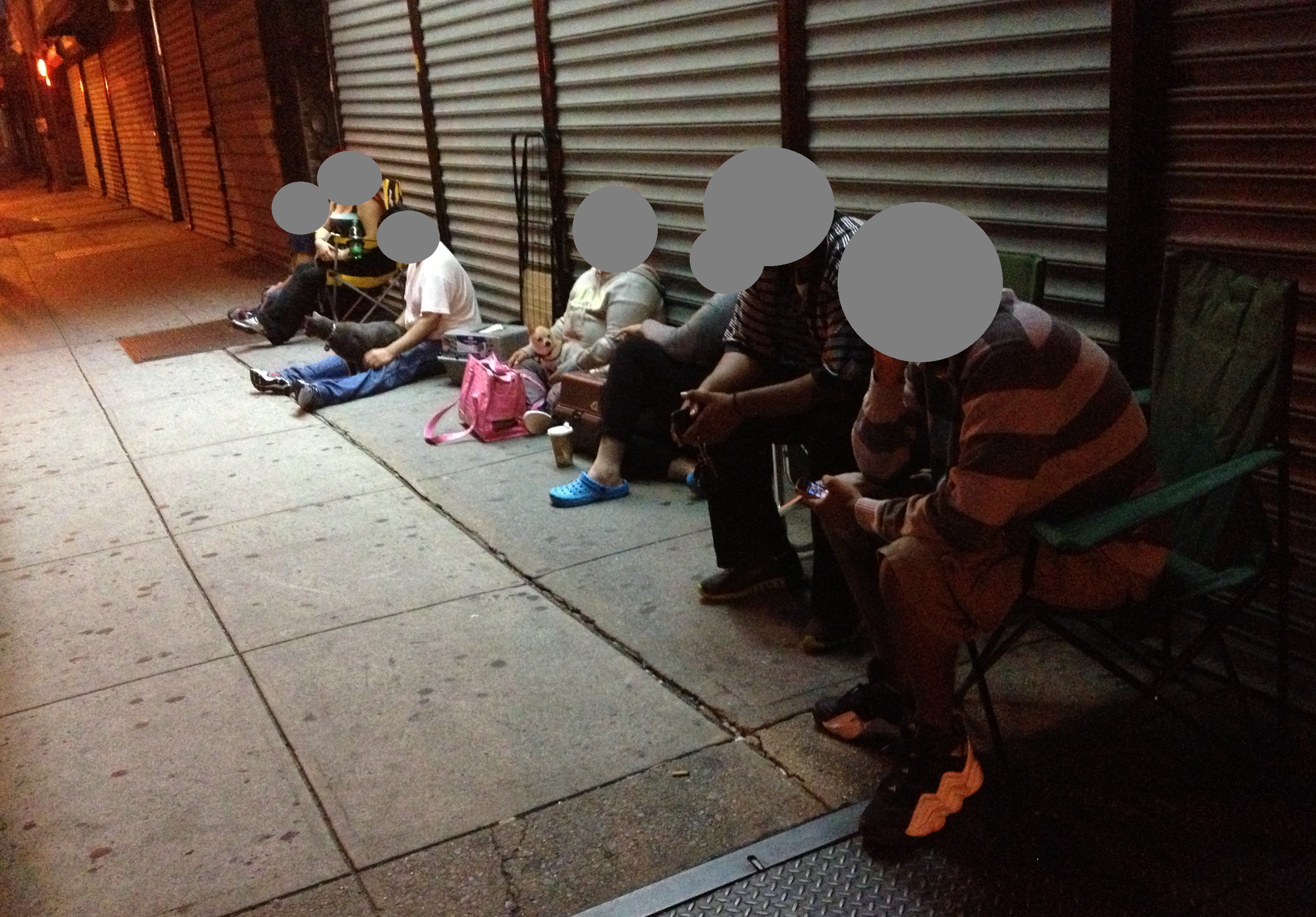 I arrived at 5:00 am for a spay/neuter clinic in Cypress Hills (Brooklyn) so my foster dog, Niko, could get neutered. Normally I can [barely] afford a private veterinarian, but I’m currently out of work and my credit cards are maxed out from a recent move, so I opted for the $125 subsidized surgery for Niko.

I thought we’d be first in line, but by 5:00 am there were already 10 people ahead of us. The first person had arrived at 4:00 am to secure a spot for her dog.

As the sun rose, the line kept growing. 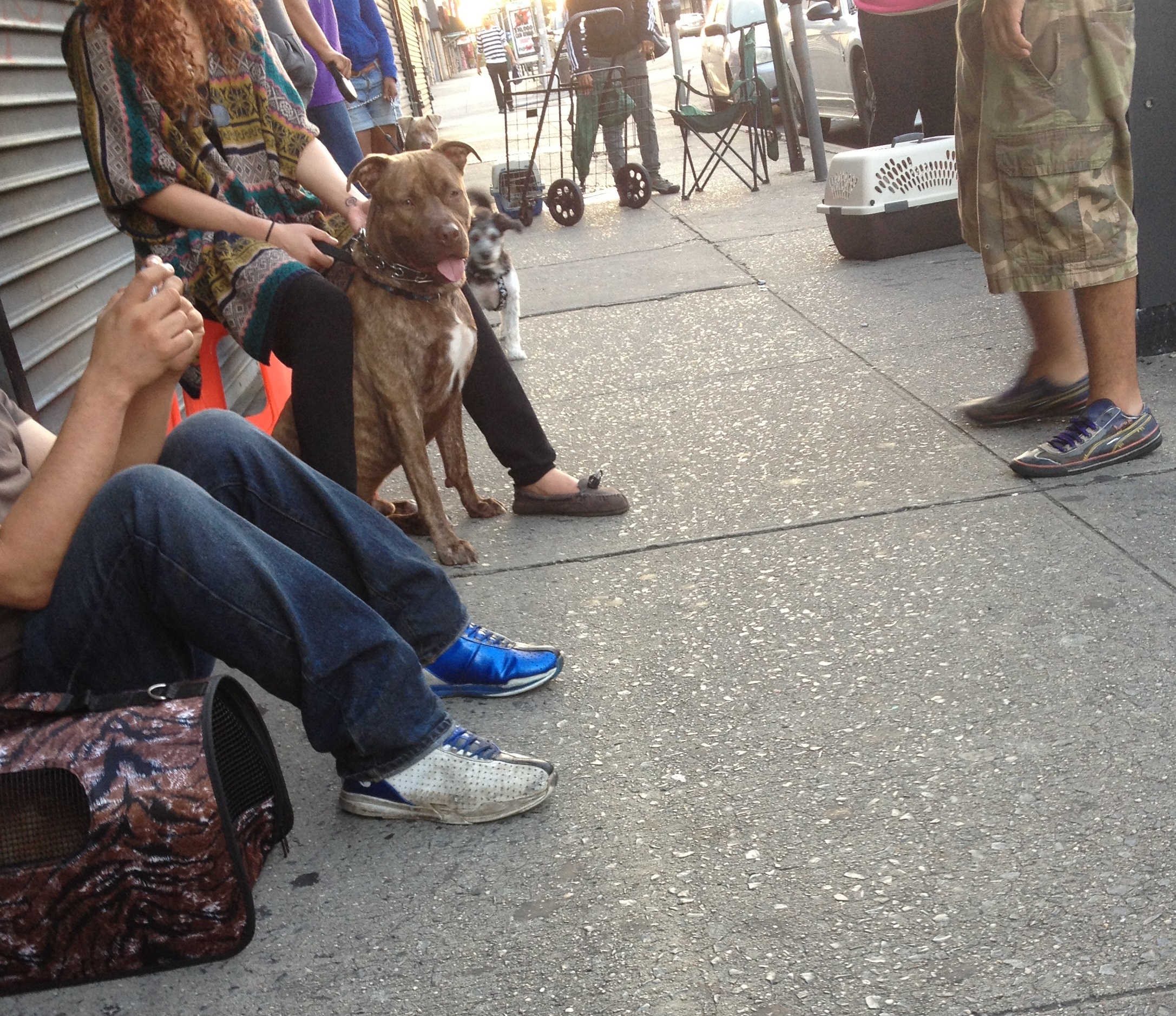 However, there was a limited number of surgery spots, so only 1/3 of the line made it in that day. The rest got a “raincheck” to come back another time.

As the crowd learned that every spot was full I watched a family member hug a little boy whose cat couldn’t be spayed that day, even though they’d been there for hours. 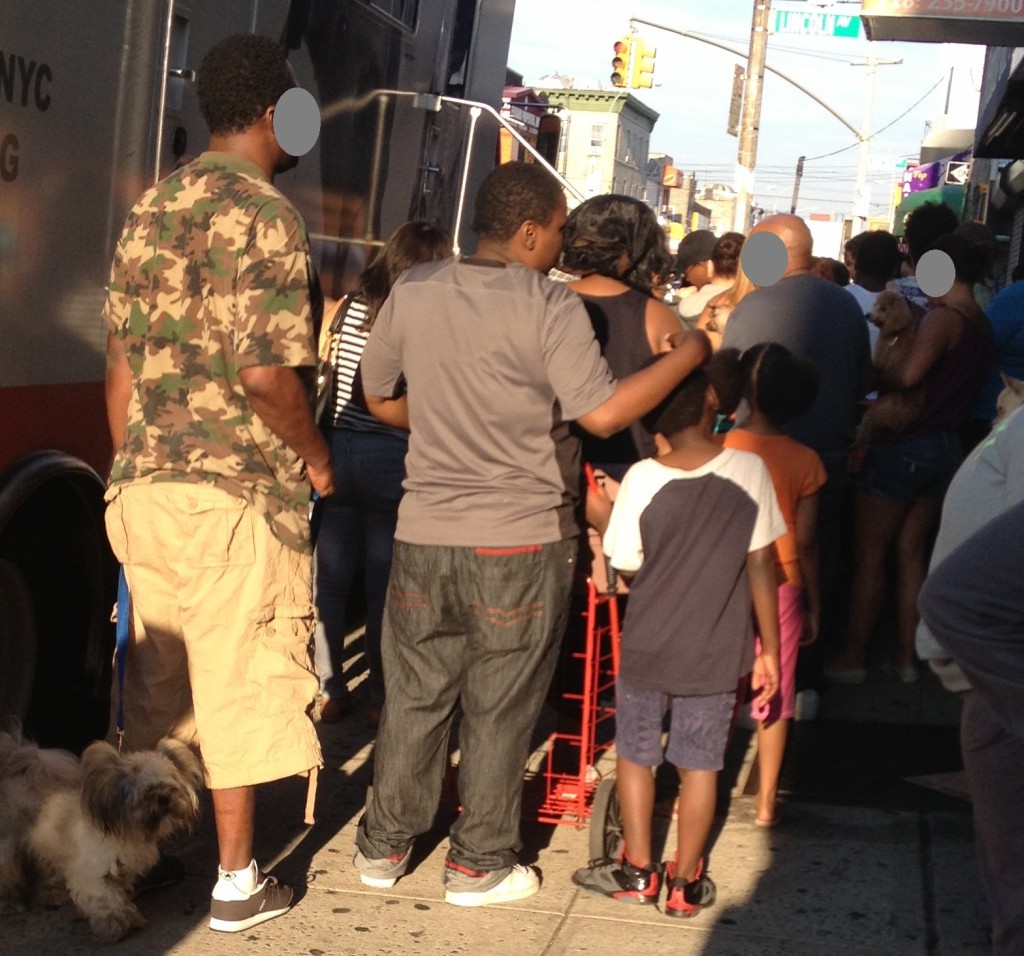 I met a man who held his cane in one hand and his dog in the other. His wife and their other dog were there, too. Neither got a spot that day. 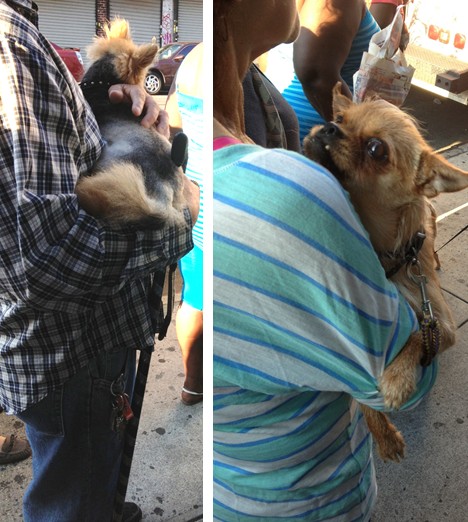 A little girl carried her puppy home. There weren’t any more spots, so they’ll have to come back another time. 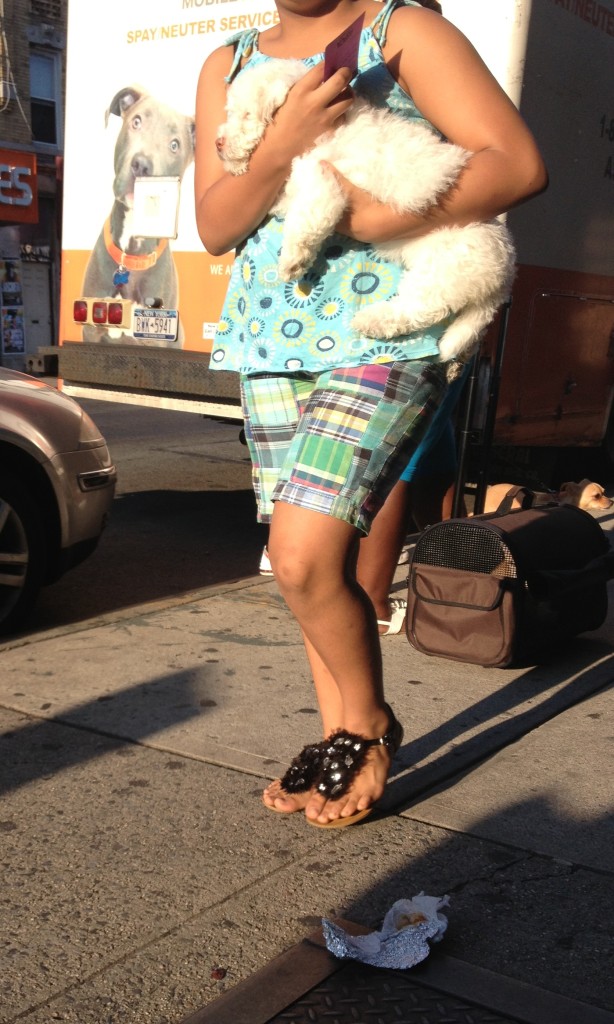 When I got home that afternoon I checked Facebook. This meme was making the rounds again: 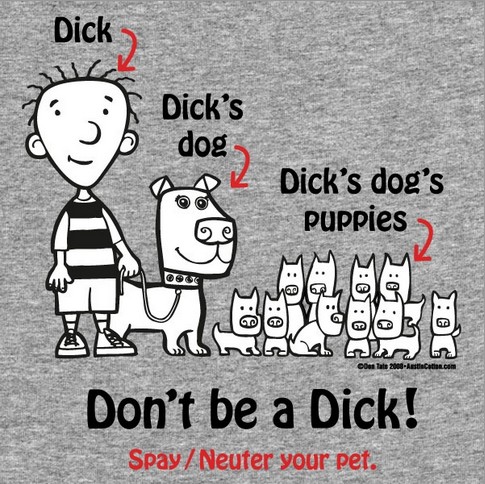 I thought to myself, “Were all those the people I saw today “dicks?” The people who stood in line with me, holding their pets, watching the sun rise in hopes of getting a spay/neuter spot? 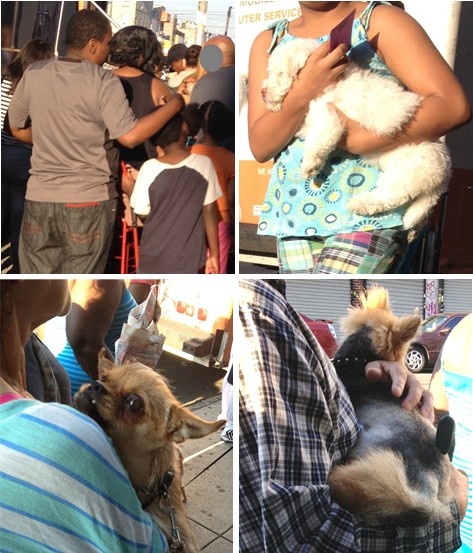 No. No, they were not “dicks.” And I hope they never see this meme.

I also know there are many, many others out there — people who aren’t “dicks.” People who want to spay/neuter their pets but can’t access or afford it. People who didn’t get spots. People who couldn’t get there in the first place.

To put things into context, I want to share some stats about the area where this spay/neuter event was held (Brooklyn Community District 5):

And yet, the people of Brooklyn Community District 5 waited in line starting at 4:00 am for a chance to have their pets spayed/neutered — 2/3 of whom would have to try again another day.

Across the country, people are struggling. A 2013 report found that 80% of American adults struggle with joblessness, near-poverty, or reliance on welfare for at least part of their lives. An estimated 40% fall into poverty for at least one year.

And many of them have pets.

So the question we should be asking is not, “How do we reach all the people who are ‘dicks’?”

The question we should be asking is, “How can we better support all the struggling pet owners who are not?”

As they say on Sesame Street, “Who Are the People in Your Neighborhood?” 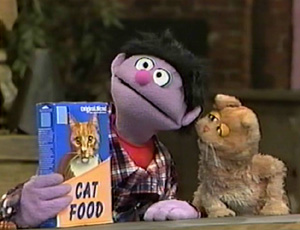 Turns out, they’re mostly people who love their pets, just like you love yours and I love mine.

But chances are, many of them need our help. It’s up to us to offer it.

PS: The award for being first in line at the spay/neuter event last Saturday goes to this family……now THAT deserves a cronut!!! 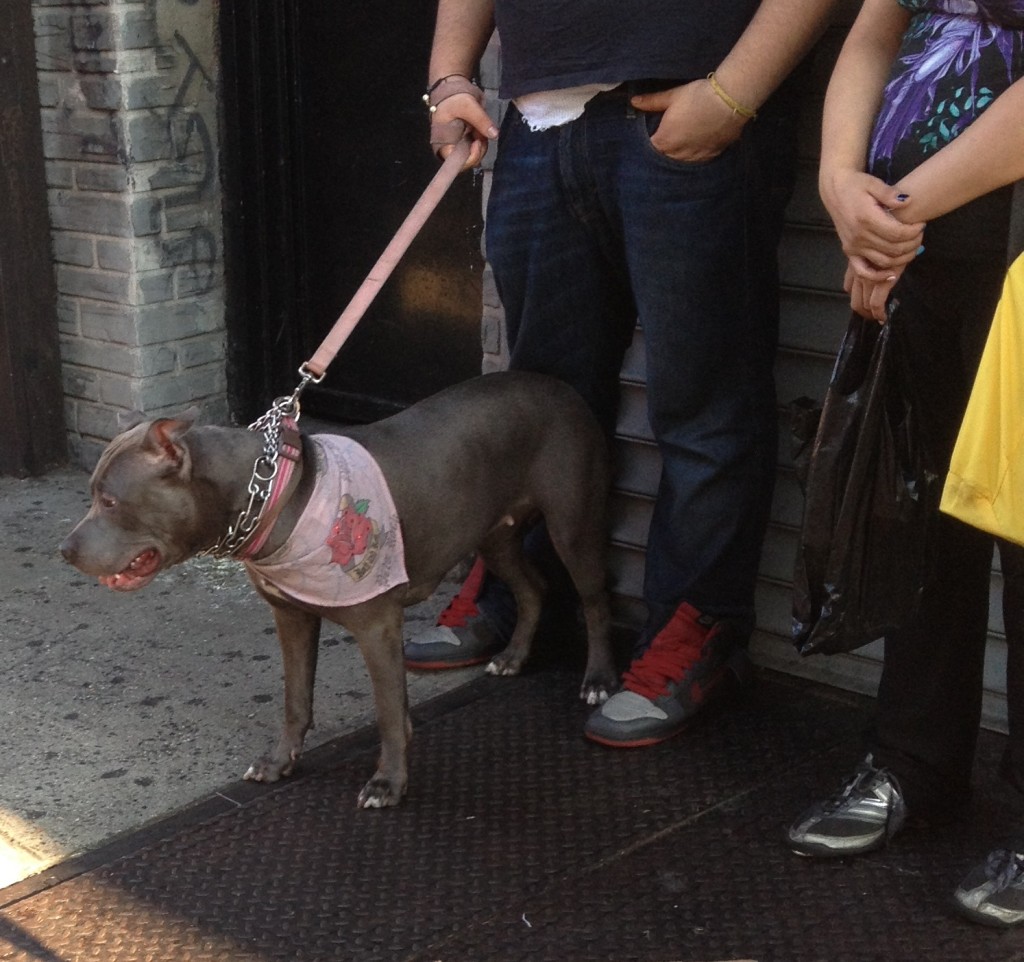