Anyone who has spent time in a shelter knows the scene in the lobby: a seemingly endless flow of people surrendering their pets. You know, “those people.”

Anyone who has spent time advocating for pit bulls knows the story: irresponsible or uncaring people get “these dogs” and dump them at shelters when they’re no longer wanted. 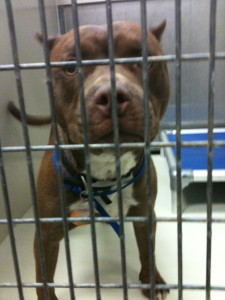 I used to work for a humane society in Philadelphia, and I used to tell the media:

“Help! We have a pit bull problem!”

“Pit bulls are flooding the shelter because people buy them for the wrong reasons — as status symbols or for fighting — and then they dump them!”

I was at the Philadelphia Animal Control shelter in September 2010 and met a cropped-eared brown pit bull who reminded me of my own dog, Sarge (shown below).

[Note: Sarge truly was owned by an a-hole.] 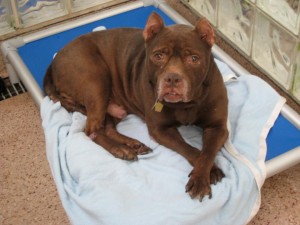 But could he? Was he?

We adopted him, on a whim.

So how could this dog be proof of Philadelphia’s “pit bull problem” that we — that I (!) — had warned the media about?

I can’t speak for every dog. Surely there are some dogs who have been failed by their owners. And surely there are a few dogs who just ain’t right (though most are just fine).

But I can tell you the story of my dog, Junior.

Why? Because of this. 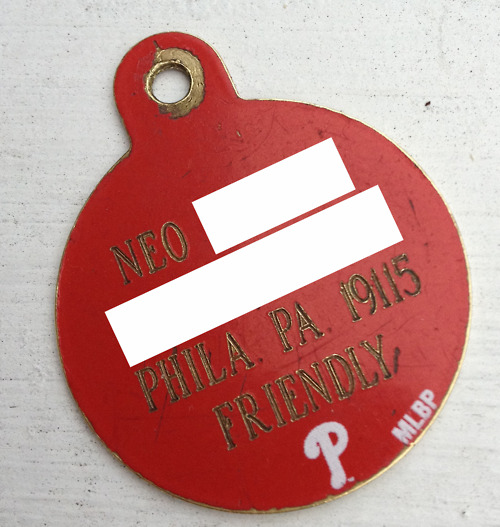 This was Junior’s tag. The shelter forgot to remove it. Lucky for me, it had his owner’s name, address, and phone number. So I tracked him down. And he was happy and relieved that I did.

He’s a phenomenal man, an amazing father, and an all-around great person.

Here is what he had to say about Junior (formerly “Neo”), in his own words:

“I tried to adopt from a shelter but they wouldn’t give me a pit bull because I had a baby on the way and a 4-year-old living with me at the time.”

“He was just the best dog anyone could ask for.”

“He was introduced to the kids in the house and he never gave anyone a problem.”

“One thing is for sure, he was great with kids. Maybe it is because he has a big heart, or because I trained him to be good with kids, but that dog has no hate in him. He is so loving. My son would chill with him all the time and I had no worry. And my son was very young at that time.”

“He was always happy.”

“I would take him to the park every day after dinner. That was our ritual and we would have a ball. He would catch the tennis ball and bring it back. He loved to run.”

“Most of all, I think he liked snuggling on the couch with my son and me, just chilling.”

“He also liked to go places. He was always sitting shotgun, no matter what.”

“My family and neighbors all loved him.”

“The kids around the neighborhood would come by all the time and ask if they could walk him.”

“When they say man’s best friend, yeah, he was.”

“Giving him up was one of the hardest things I’ve had to do.”

“I was in tears for days about it. I even tried to get him back. But thankfully they said he had been adopted into a good home already.”

“I was a single father who worked full-time and was a nursing student and also had to care for my mother. While I was working or at school or helping my mom, there just wasn’t anyone there to let him out or keep him company. Friends and family all took different shifts to help.”

“It worked for a while, but at the end of the day, it just wasn’t fair for him.”

“I found out he got adopted when I called the shelter trying to get him back because I missed him so much. The shelter wouldn’t give me any info about his adopters, but I did leave his original name tag on which read, ‘Neo – Friendly,’ and my address. The wonderful people who adopted him were kind enough to find me on Facebook. It put my soul at ease.”

“It has been awesome being able to feel like I know what he’s up to.”

“I’m not going to lie, when I see pictures of him, I wish he was right here next to me.”

“But he could not have been placed in a better home.”

“He and I are very blessed. I am just happy he is in a great home with great people and his little posse.”