Guest Post: Turning a Negative into a Win-Win Opportunity

If you’ve met Stephanie Filer of the Animal Rescue League of Iowa, you know what a brilliant advocate she is for dogs and for her community.

This week she totally outdid herself, turning a sticky situation into a win-win opportunity for everyone. Lucky for us, Stephanie gave me permission to share her experience here.

In her own words….

Someone posted this photo to our Pit Crew page this weekend. It was on the patio at a local bar that is in the middle of the downtown Farmer’s Market traffic, a huge event held  every Saturday in Des Moines, Iowa.

It started to blow up on Facebook, so I just posted asking if anyone knew the owner so we could talk to them and see about having a conversation about why the sign exists.

My friend used to work there back in the day and contacted the owner letting them know I would like to talk to them.

I offered my cell phone number and they called me on Tuesday.

I had a really great conversation with the owner. She explained that they had an incident last year with a jerk guy who had a “pit bull” dog and wasn’t watching his dog, and it was a huge confrontation when she asked him to leave. The dog hadn’t done anything, but because the guy was getting drunk and wasn’t watching his dog, it was time for them to leave. She never wanted to go through that again (totally understandable!) so her lawyer recommended this wording to protect her from him, in particular, but also situations like that in the future.

I talked to her about our concerns for the message it portrays and how it excludes responsible people and their dogs. I asked her if we could come up with different verbiage that would better protect her, while not eliminating other good dogs, if she would consider it.

Not only was she more than willing to continue the dialogue, she offered to do a fundraiser for us, too!

She gave me her email and asked me to send some suggested verbiage. Said she loves the ARL and supports what we do, but just didn’t know what else to do at the time. I told her I assumed there was a good reason for the decision, but thought we could help offer a better way. I assured her that’s why I wanted the opportunity to speak to her before making any assumptions…and she was very appreciative of that.

In the end, I think this is going to turn out to be a GREAT PR move for both organizations,  instead of a potential nightmare. If we had boycotted the business or made a bunch of angry demands, it would have been nothing but mud-slinging and no changes for the dogs and their families.

Here is the email I sent her to follow-up:

“Great to speak with you this afternoon and thank you again for your willingness to have an open dialogue about this topic. The good news is, we both want the same thing – to provide pet-friendly opportunities for responsible pet owners and their dogs, while keeping the irresponsible owners and naughty dogs away. We deal with this same challenges at events we host that we encourage people to bring their dogs to. So, with that in mind, how you feel about changing the sign to read the following:

DURING THE FARMERS MARKET WE WELCOME FRIENDLY DOGS AND THEIR RESPONSIBLE OWNERS. Dogs must be leashed and under the control of their owner at all times. Dogs deemed unsuitable will be asked to leave immediately.

The revised sign would actually put even more restrictions on eliminating bad owners and bad dogs (including the jerk from last year), while not singling out good dogs and good owners. So it would truly be a win-win.

I really think this could be a great PR opportunity for both of our organizations too! We have been getting a lot of questions about it on our Facebook page and have happily updated them that we’re working together on it. If you’re open to revising the sign, we would gladly share that news with them and promote this as a local establishment who welcomes GOOD dogs of all breeds. We could even do a patio night on a weeknight where people could bring their dogs as a fundraiser – we have done something similar with another place in the past. Or figure out something else fun to partner on.”

She emailed me back right away and said she had forwarded the language to her attorney and will be printing a new sign for this weekend’s market. It was awesome because we both feel good about the result: it’s a win for her, a win for our cause, and most importantly, a win for dogs and their families.

To summarize, here are a few takeaways that I got from this experience:

And the most important takeaway:

In fact, I never tell people that I have a pit bull when doing advocacy work. I think it lessens the effectiveness. And it doesn’t matter. It wasn’t about me and what I wanted; that wouldn’t have inspired her to make a change. It was about what she wanted and how we could help her better accomplish that. Purely a business decision, not an emotional one. 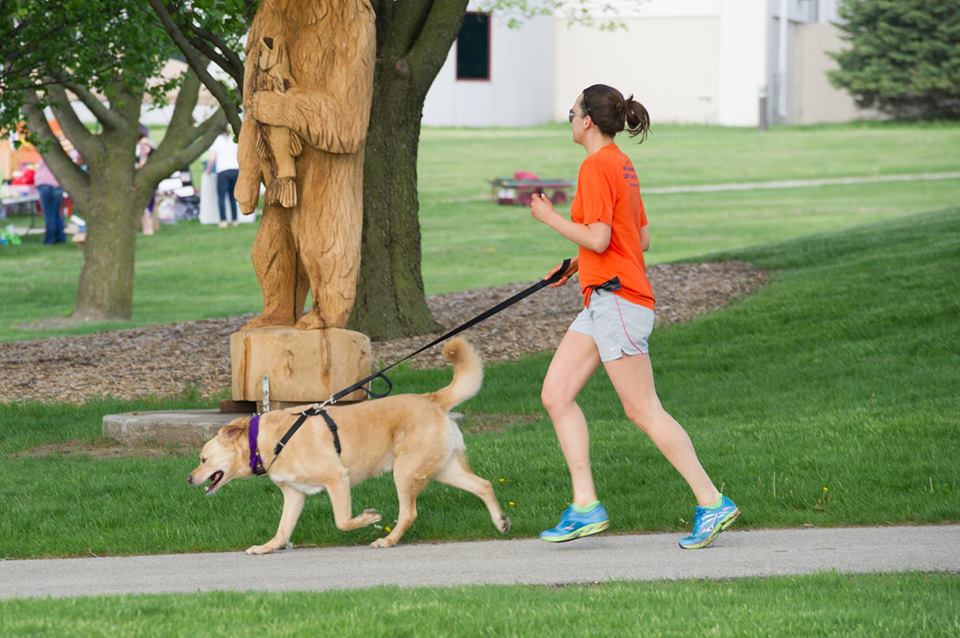 Stephanie and her dog at the ARL Dog Walk & Fun Run. Photo by Kesling Photography (http://www.KeslingPhotography.com).