Warning! That Dog Will Change Your Life

You know all those warnings about the terrible things that might happen when you adopt a pit bull dog? My husband, Thad Stringer, and I felt we weren’t properly “warned” before adopting ours, so he wrote this article to help others.

“Warning! That Dog Will Change Your Life” 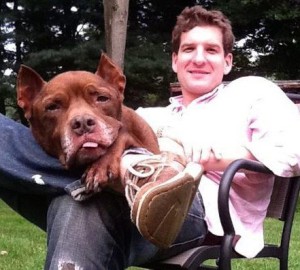 I grew up with dogs; they were always present, a constant in our home – mostly spaniels. We were those fiscal conservative/social liberals you’ve heard about. We wore boat shoes, knew how to tie bow ties and seemed to be sent home from the hospital with blue blazers. We attended liberal arts colleges, pursued advance degrees, and wore pastels.

But we did not adopt pit bulls.

But after I graduated college and was about to finish law school, that’s exactly what my wife and I did. We adopted a pit bull dog. And we jumped in with both feet. We adopted a one from a cruelty case.

We were told that adopting a pit bull dog would forever change our life:

And when Sarge became a therapy dog, we became part of our community. 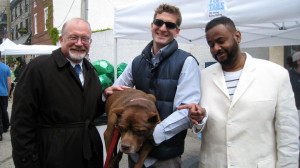 We were a constant presence in schools across the city doing outreach with people we had no other reason to meet. We interacted with elders tucked away in nooks and crannies of the city that we didn’t know existed. We met amazing young men in a group home for abused teenagers. We even met the Mayor of Philadelphia, who named Sarge as “Humane Educator of the Year” in 2010.

Maybe we should have been warned that adopting this dog would change our life. Because if someone had only warned us of all the good things that would happen to us when we adopted a pit bull dog, we might have adopted one sooner.