10 Tips for Speaking with Legislators about BSL

Is your community discussing breed-specific legislation? Here are 10 tips for speaking at a public hearing.

(1) Stay for the entire meeting. I recently attended a public hearing in Middletown, New York, where a new dog ordinance was first on the agenda for discussion. After the dog discussion ended, the dozens of advocates in attendance left the hearing; I was one of two people who stayed put. Several of the council members voiced disgust over this. One said, “These dog lovers claim to care about the community, but they leave after their issue is finished. How can they say they care about the community?” 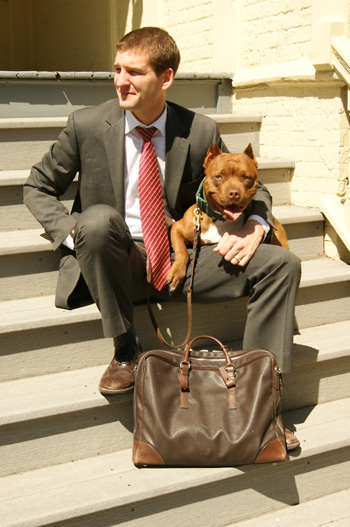 (2) Dress to impress. There’s a time and a place for our doggie t-shirts and sweatshirts; a formal political meeting is not it. We’ll be taken more seriously if our attire conveys professionalism and respect. And if you’re like me, your dog/advocacy paraphenalia is ragged from wear and tear. Politicians are not impressed by this. They wear formal ”work” clothes to these things, and so should we.

(3) Avoid the “isms.” It’s tempting to compare discriminatory dog laws to racism, the holocaust, fascism, and other social atrocities. Don’t. It especially insults people who have experienced those “isms” firsthand, and your legislators could be one of them. A Washington Post column noted, “Nazi comparisons are the most extreme form of political speech; once one ties his political opponents to the most deplorable chapter in human history, all reasoned argument ceases.” In an Ohio hearing to discuss the repeal of state-wide breed specific legislation (BSL), one committee member was so offended by a comparison of BSL to racism that she walked out of the room. You want/need them to stay in the room.

(4) Don’t come empty handed. When you speak, it’s important to present the facts, studies, and research to demonstrate that discriminatory dog laws have never resulted in increased public safety. But don’t expect the legislators to remember everything you said. Instead, present them each with hard copies of what you cited. Having one printed copy per legislator shows respect and makes it easier for them to digest everything. They probably received countless emails on the topic, so delivering these materials in person increases the chances they’ll really read it. It might not save the trees, but it could save the dogs.

(5) Propose a solution. There’s a good chance you’ll convince legislators that discriminatory dog laws are not effective, but don’t forget the most important part: the solution. A small town Mayor once told a room full of dog advocates, “You all say that our proposed ordinance is not the answer, but none of you has proposed an alternative plan.” Once an elected official proposes legislation, it’s hard to go back on the promise to take action; even though their opinions may change, they still feel the need to “do something.” Propose that something. It can be as simple (and effective!) as enforcing existing leash laws, fining owners who don’t license their dogs, or partnering with community groups to offer low-cost vaccination and microchip clinics. If the legislator can claim this as his own idea/solution, even better! But spell this out for them, so they can take action.

(7) Share your stories strategically. Telling legislators how much you love your dog doesn’t always change minds, especially if they mistakenly believe your dogs exist at the expense of public safety. Instead, tell stories of how your dogs have benefited the community. Is your dog a therapy dog? Describe how he’s enhanced the lives of vulnerable people in your community (e.g., isolated seniors, children with special needs). Do you spend money on your dog? State the dollar amount you pay annually to local business owners (e.g., veterinarians, pet food stores, dogwalkers, trainers) because of your dog.

(8) Practice your poker face. This is a tough one, especially when emotions run high. But the dogs are counting on you to be polite and in control of your words. There’s a good possibility that a legislator (or another audience member) will say something hurtful and offensive about you and/or your dogs. Don’t let this catch you off guard; get a friend to practice insulting you (for real!) and test out your poker face. If you can’t stay collected after hearing these insults, better to find out now rather than in public and on record. Also, don’t moan-and-groan, roll your eyes, whisper to the person next to you, or tsk-tsk when someone says something offensive. Reacting that way will hurt, not help, your case. Commissioners definitely notice.

(9) Introduce yourself to legislators after the meeting. When the meeting is over (and you’ve stayed to the end, of course!), kindly introduce yourself to the legislators – even the ones on the other team. Shake their hand. Look them in the eye. All of this puts a human face on the issue, and those simple interactions can go a long way in humanizing the issue. And it’s a good business practice.

(10) Say thank you. When you’re shaking hands, thank the legislators for being concerned about public safety. In doing so, you can reiterate that you share this goal.