Clicking Pens, Puke, and the Benefit of the Doubt

I try to give people the benefit of the doubt and not make assumptions about why-they-do-what-they-do. Today I was reminded why that’s important. 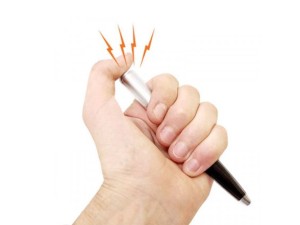 I was riding the subway to work when a woman sat down next to me. She starts clicking her pen, rapid fire.

For most people this would be a mere annoyance, if they even noticed it. But I have misophonia, a condition that causes debilitating panic, fear, and anxiety when I hear certain sounds. Misophonia is much more than  a “pet peeve”; it’s believed to be a neurological disorder, over which I have no control, and I’ve had to structure my life around it since elementary school.

When I switched seats to escape — “flight” is always better than “fight” — the woman was offended. Very offended. And she let everyone know it. She claimed I switched seats because of her appearance, and told everyone within earshot what a bigot I am.

Except I’m not a bigot. I’m just someone who has misophonia. I was trying to avoid a full-on panic attack on the subway, which had nothing to do with her appearance and everything to do with the pen she was rapid-fire clicking. 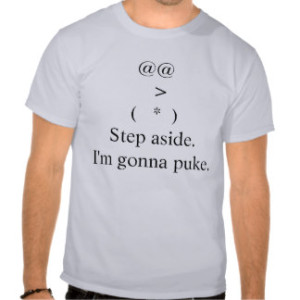 This made me think of the last time a stranger went zero-to-sixty on me.

I was coming out of the doctor’s office, having been through a long, extremely painful, and very emotional procedure. My husband was getting the car and I was waiting for him on the sidewalk. A guy with a dog walks toward me and I cross over to get out of their way.

Why? (1) Because I was trying my best not to puke on them (anesthesia makes ya queasy!), and (2) Because I was a freakin’ train wreck and wanted to be left alone.

“Oh, so just because my dog is a pit bull, you gotta cross the street,” he said. Then he added, “You’re ignorant.”

Rudeness aside, I wanted to tell him that I owned 3 pit bull dogs and spent part of my career advocating on their behalf, but at this particular moment I was more concerned about the vomit that was creeping up my throat and the blurry vision I had from all the crying. I bet he’s still telling stories about “the ignorant woman who crossed the street to avoid his pit bull,” and it wouldn’t surprise me if he’s keen on “awareness campaigns” to combat all the “haters” like me.

My point is this: everyone has issues to deal with, and most of the time you have no idea what’s going on in a stranger’s mind.

That man who nearly tripped over himself getting out of you and your dog’s path? He might be biased against your dog, but it’s also possible he just heard his job is on the line and he’s scared about how he’ll feed his family if he’s unemployed. That old lady who gave you stink eye? She might be a cranky jerk, or maybe you remind her of her daughter who hasn’t visited or even called in years. The family with the toddlers who crossed the street when they saw you and your dog coming? They might think your dog will eat their baby, but it’s also possible their kids haven’t learned to “ask before approaching dogs” and they were doing you a favor.

[So what about the times when you know someone is avoiding your dog because of his/her appearance, and they tell you this in no uncertain — and sometimes unfriendly — terms? This has happened to me on occasion, and I’ll share my tips for dealing with these situations in a future blog post.] 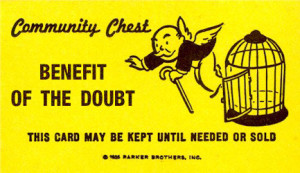 “This card may be kept until needed.”

In the meantime, try and remember that the world is a complicated place and everyone who lives here is dealing with his or her own battles. There’s tremendous peace-of-mind that we can enjoy by giving people the benefit of the doubt.

Take a deep breath, look into your dog’s eyes, and move along. Your dog would want you to.