I am Good: Affirming the Counter-Stereotype

Have you ever been pre-judged by a stereotype or experienced prejudice? Ever been falsely accused of something? How did you respond? 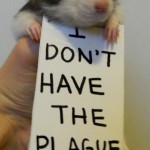 Example of negating the stereotype

Example of Negating the Stereotype

A 2008 study published in the Journal of Experimental Social Psychology examined  methods for reducing the activation of stereotypes and prejudice.

The researchers found that negating the stereotype was not an effective method.

In fact, negating stereotypes actually enhanced  prejudice and made stereotyped associations even stronger. 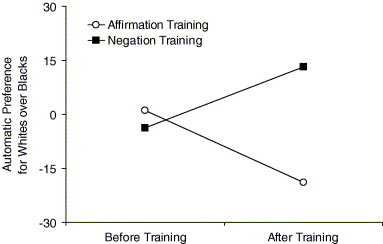 So what was effective?

The research found that affirming counter-stereotypes was the best way to reduce prejudice and disrupt stereotyped associations.

Confused? Here’s how this plays out every day in the world of pit bull dog advocacy….

We’ve all heard the rumors that all pit bull dogs are vicious killers, blah, blah, blah. There are two ways that advocates typically respond:

The second option — affirming the counter-stereotype — is more likely to reduce stereotyped views of pit bull dogs and dissociate “pit bulls” from negative associations like “monsters.” This approach is also more likely to stick over time.

Here’s another example, courtesy of the Coonhound community. Some folks think Coonhounds are only used for hunting, so they aren’t desirable as family pets and will exhibit behavior challenges. 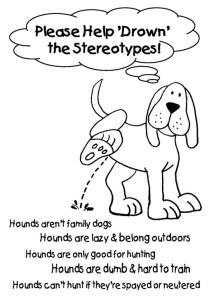 QUICK TIP: If you have to use the word “NOT,” you’re probably refuting a stereotype, instead of affirming a counter-stereotype.

* The full study is: Gawronski et al., “When ‘Just Say No’ is not enough: Affirmation versus negation training and the reduction of automatic stereotype activation,”Journal of Experimental Social Psychology, Volume 44, Issue 2, March 2008, Pages 370–377.