The Fart Heard ‘Round the Web

With nearly 70 million dogs living in the United States, our four-legged friends are something that bring Americans together. We love our dogs and we love talking about them with anyone who’ll listen. It’s no surprise that animals are the #1 most popular cause shared on social media these days.

While there are issues and organizations within the dog-owning community that divide these 43,346,000 dog-owning households, there’s one topic in particular that apparently binds us together: DOG FARTING. Yes, folks, you heard me. DOG FARTING. And it’s EVERYWHERE.

Earlier this week, I “caught wind” that April 8th had been declared “Dog Farting Awareness Day,”so I threw my own meme into the ring (my two stinkers, Pug and Bug) and posted this on my personal Facebook page around 10:30 pm on April 7. 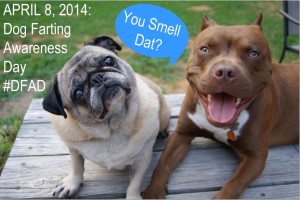 When I woke up on April 8, the “Dog Farting Awareness Day” meme had been shared more than 328 times, just from my rinky-dink personal Facebook page! (The cost of creating this meme? Zero dollars.) 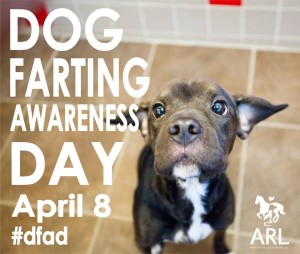 But their meme — shared only once on Facebook — was even more “potent”. At last glance, it had been shared 35,437 times and generated more than 2.7 million views (and that number continues to rise). Talk about being “explosive”!

Then I saw that Heritage Humane Society down in Virginia had joined in with their version of “Dog Farting Awareness Day”. 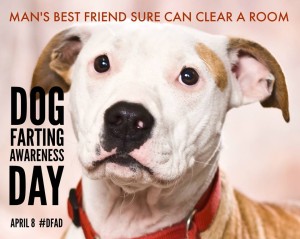 Shared just once on their Facebook page, their “Dog Farting Awareness Day” meme reached more than 20 times the number of people than their average reach. According to HHS, it even out performed the posts they had paid Facebook to boost.

By noon on April 8, “Dog Farting Awareness Day” had officially gone viral. And folks in every corner of the country — from shelters to breed rescues to everyday dog owners — wanted to be part of the movement, so they uploaded their own memes and tagged them with #DFAD. Here were some of my favorites: 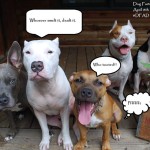 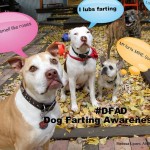 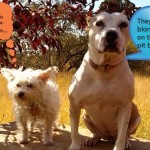 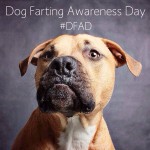 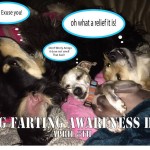 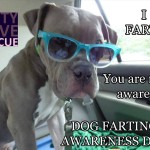 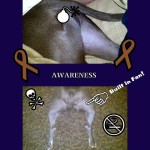 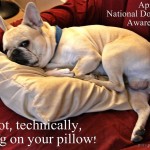 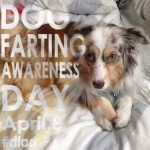 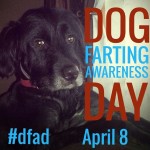 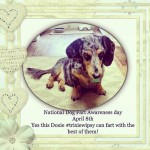 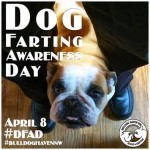 What started on Facebook quickly “seeped” over to other social media platforms. Search Twitter, Pinterest, and Instagram for “Dog Farting Awareness Day” and #DFAD and see what you find. I asked a friend who is a social media expert in the animal welfare field what he thought of this “explosion”. He replied:

“It’s brilliant! How many brands/orgs would kill for a campaign that carries over to all platforms? Answer: all of them. And this all happened for free, with hardly any planning and with no formal media outreach. You can’t beat that, especially when that time and money is better spent on direct care for animals in need.”

So what was it that made “Dog Farting Awareness Day” so successful? Aside from the fact that Americans seem to enjoy talking about…..dog farting?

It adhered to what research, surveys, and social media stragists have been telling us for years regarding the nature of social sharing: #DFAD was fun, upbeat, original, and invited the user to join the party.

This 2013 New York Times article, “Good News Beat Bad on Social Networks” explains that social media is better suited for “Polly Positive” than “Debbie Downer“. “By scanning people’s brains and tracking their e-mails and online posts, neuroscientists and psychologists have found that good news can spread faster and farther than disasters and sob stories.”

“The ‘if it bleeds’ rule works for mass media that just want you to tune in,” says Jonah Berger, a social psychologist at the University of Pennsylvania. “But when you share a story with your friends and peers, you care a lot more how they react. You don’t want them to think of you as a Debbie Downer.”

Farts aside, let’s get serious for a moment.

One of the criticisms of “Polly Positivity” social media sites like Buzzfeed and Upworthy is that they’re fluff, and they don’t share anything of real importance. But if you step back and reflect, there were actually some very important takeaways that came out of “Dog Farting Awareness Day”.

One of them came from the thousands of #DFAD photos posted by dog lovers around the country, such as the hundreds of family pets posted here. The photos show that the overwhelming majority of Americans love their dogs and care deeply about them as members of the family. That’s a strength that “Dog Farting Awareness Day” built on and it worked. And it’s a strength we must remember when deciding how to support dog owners in our communities, and how to assess where we can have the greatest impact on reaching pets in need. 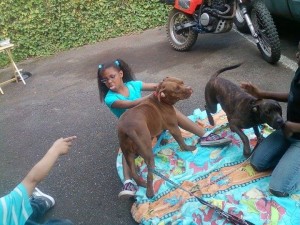 Another important takeaway was that dogs of all breeds, shapes, sizes, and sources are cherished family pets. While the traditional thinking has been that certain dogs — such as pit bulls or senior dogs — are unwanted and more likely to end up as victims of abuse/neglect than as everyday family pets, the user-generated memes/photos from “Dog Farting Awareness Day” showed quite the opposite. I have no idea who these people are who posted #DFAD photos, but it’s clear their dogs are loved — including the pit bulls and the senior stinkers.

One last important takeaway from “Dog Farting Awareness Day” is that dog-related messaging spreads quickly and has lasting effects. So when it’s time to discuss more serious dog-related matters, we must speak accurately — without fear-mongering or hysteria — and consider the unintended consequences of our campaigns, no matter how we intended them to be perceived by the general public. This case study shows how everyday dogs and their owners suffer when horrific matters like dog fighting aren’t put into context and adjusted to fit the target audience.

[Kudos to the humane organizations like HSUS who now understand this and have evolved, to the benefit of ALL dogs (both pets and victims of cruelty alike). While I can’t speak to their fundraising practices, it’s clear that they continue to be just as effective in helping victims of cruelty even after their messaging to the general public evolved.]

So, will you and your dogs be celebrating “Dog Farting Awareness Day” next year? I hope so, because this one’s gonna linger! PS: Apparently it even has a Facebook page: https://www.facebook.com/dogfarting 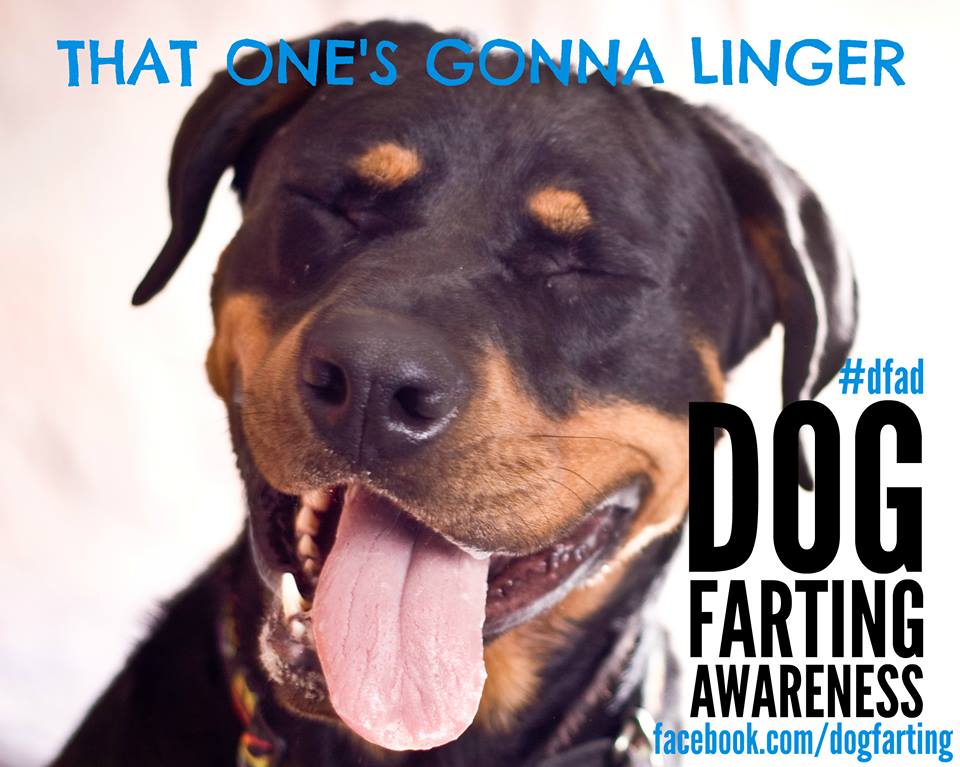