“I Love These Dogs”: The Squiggly Lines of Pet Owner Support

“Will they be in cages all day?” he asked. “I know my yard isn’t great. But at least the dogs can run and play here. They love to play.” 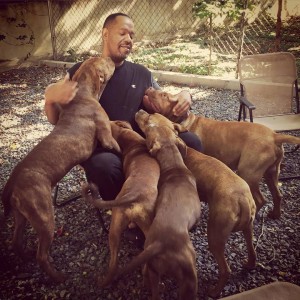 Derek had lots of questions about the group that offered to shelter his dogs and find homes for them.

“Will they make sure the new family is good?”

“How will people know they’re there? Once they meet them, they’ll see that they’re good dogs.

Having worked with animal shelters/rescues for almost a decade, I forget what it’s like to navigate this system for the first time. I used to bring shelter dogs *into* my home. I stood in a different customer service line and I exited through a different door. A staffer once high-fived me for “saving a life”. I felt amazing.

Of course, there was also the time I rehomed my 12-year-old pit bull, Martha Washington, in 2014. I felt like The Worst Person Alive.

I had recently divorced and money was tight. I was doing my best to care for my pets, but my love was not enough. On an October morning, my ex-husband picked up Martha and she never came back. She had a new home, but it wasn’t in mine.

So when Derek, a Ruff Riders family member, said his personal life was unraveling and he asked for help, I remembered how it felt to be The Worst Person Alive.

You first met Derek and his dogs in August 2015, when NBC Nightly News with Lester Holt did a segment on Beyond Breed: http://www.nbcnews.com/nightly-news/video/this-brooklyn-woman-may-be-a-dog-s-best-friend-507064899573

“My dogs mean everything to me,” Derek told NBC Nightly News. “I LOVE THEM.”

It was always clear that Derek loved his dogs, ever since he first contacted Beyond Breed a few months prior. He asked for help with pet food and vet care, which we provided. 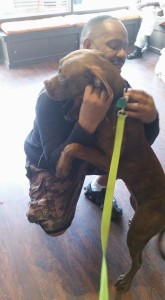 Derek and Sheeba, After Sheeba Got Spayed: Fall 2015

Soon after this segment aired, Derek’s like changed. Circumstances outside his control made it harder and harder for him to afford vet care and pet food for his dogs, even with Beyond Breed’s assistance. Derek needed to find new housing. [Brooklynites, you know how hard it is to find affordable rental housing….now add 5 large dogs to the mix! Oh, and Brooklyn is now “officially the most unaffordable housing market in America”.]

Faced with this reality, Derek had to make the hardest decision of his life: the decision to find new homes for his dogs.

The goal was no longer a straight line to a “forever home.” The goal had to be re-routed along the squiggly lines of reality, in all its messiness and complexity.

We stood beside Derek and his dogs, even when the goal changed.

Beyond Breed helped him identify options and navigate the complex animal sheltering/rescue system. We helped him get Sheeba spayed. Working together, we created rehoming flyers to share with potential adopters and rescue.

Derek did everything right, but months went by and nothing materialized. I’d say there were crickets, but there were regular “offers to help,” including: “I would never give up my dogs – shame on you!” and “I would live in a car before losing one of my furbabies!” One “helper” started a rumor about the dogs being used for fighting and dying on chains. Another “helper” called Derek at work to say she was stealing his dogs that afternoon…..beware! 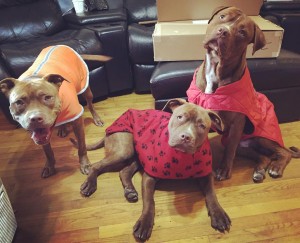 It was not an easy time, even before the “humane community” made matters worse.

Eventually, hope came in the form of Southampton Animal Shelter Foundation, who offered to take Derek’s dogs into their adoption program — thanks to networking assistance from the Animal Care Centers of NYC!

Early this morning, Derek to say farewell to Sheeba, Butch, and King, before sending them on their journey. He kissed their heads, pet their little bellies, and told them not to be afraid. After all 3 dogs were loaded into the van, Derek took a video of his “babies” while he told them how loved their are.

Not a dry eye to be found, between myself, Derek and the transport driver.

“This is so hard,” he said quietly as the transport van pulled away. “I woke up early to spend every last minute with the pups. We’ve been out here for hours!

“I LOVE THESE DOGS. We’ve been through so much together this past year. I put so much into these pups because they were the ones left behind when all their littermates got homes. I wanted to stick by them an I did everything I could. But I want them to have the best lives possible, which more than I can give right now.” 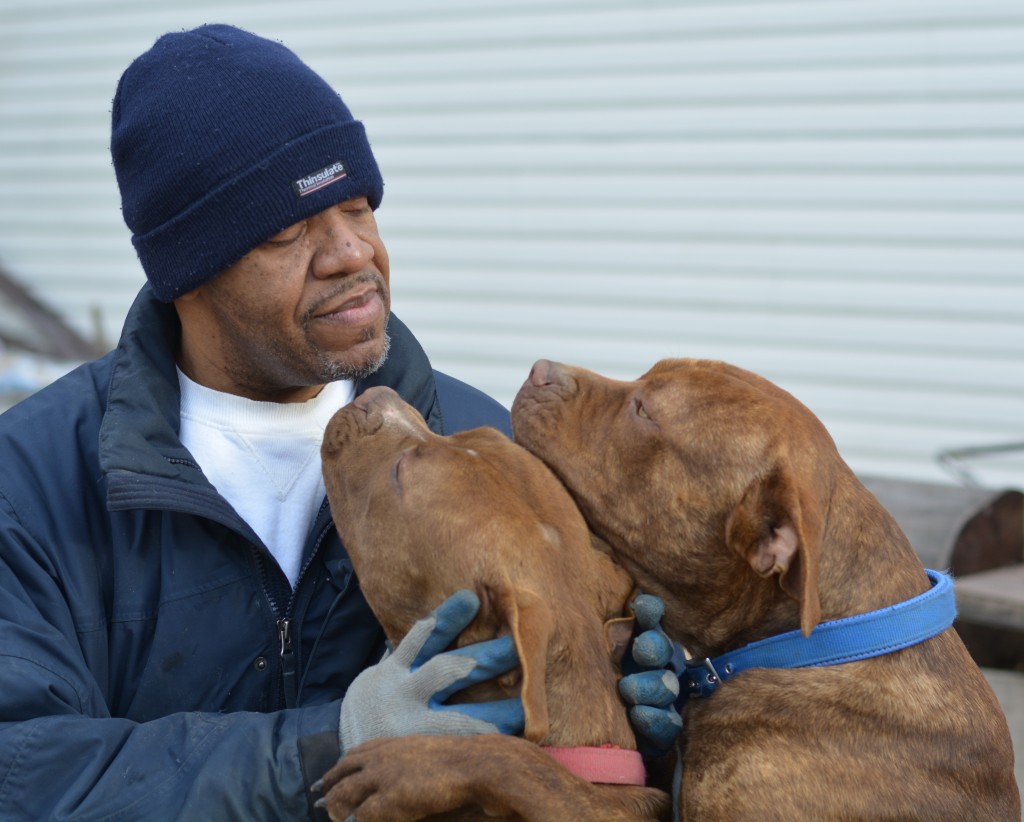 Farewell, Sheeba and Butch, You Are Loved: February 2016

SOME MIGHT SEE THIS AS A FAILURE. WE DISAGREE.

We see that a “forever home” isn’t always an option, despite our best intentions. We see that asking for help with “rehoming” isn’t necessarily a sign of failure, but of strength. We see that when you’re moving along the squiggly lines of reality, in all its messiness and complexity, it helps to have a walking partner who will stick by you.

Derek texted me this afternoon, after I sent him a photo of the pups arriving safely at Southampton. 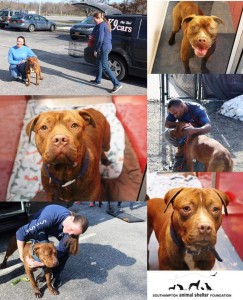 “I’m crying right now and everyone is looking at me!!!!”

I get that. I’ve been there before, crying over a farewell to Martha that I never thought I’d say.

My life and Derek’s life could not be more different. Our safety nets aren’t the same.

But when it comes to wanting the best for our dogs and needing some help to provide it, Derek and I can relate.

My heart goes out to Derek and to Sheeba, Butch, and King. May they all find compassion and comfort during life’s squiggly moments.

PS: THANK YOU to Southampton Animal Shelter Foundation and the Animal Care Centers of NYC for making this next chapter possible!

Can YOU help us assist more Brooklyn families when they need us most? On behalf of those we serve, thanks for your support: WWW.BEYONDBREED.COM/DONATE