First and foremost: I love my dog Fannie. I’m so glad we adopted her. And I adopted her thinking she was a Rottie mix, knowing that we’d encounter discrimination.

It frustrates me thinking of how much money we’ve spent over the past 6 years finding apartments that allowed Rottweiler mixes. Many rental properties did not. The ones that did were super pricey. To keep our dog, we tapped into savings and took out loans to afford the super-pricey places where Fannie could live. And we encountered a lot of rejection.

But you know what’s extra frustrating about this? Fannie wasn’t actually a Rottie mix.

Through genetic testing, we later learned that Fannie is a true Heinz 57, and there ain’t no Rottie in there. At least not in any traceable amount. Yet because of the shelter’s mistake with their breed labeling, we wasted THOUSANDS of hard-earned dollars and had some miserable encounters with landlords.

With all the new science available, many of us agree that breed labeling dogs of unknown origins is unreliable, especially with mixed-breed dogs. And most people wish they didn’t have to do it. 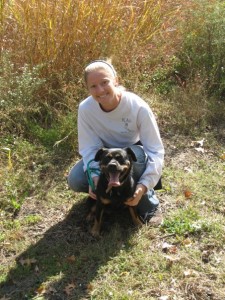 But few people are questioning whether this practice is actually required: Do shelters have an obligation to list breed guesses on legally binding adoption contracts, when they don’t have reliable information to support those guesses?

[An exception would be places where dogs are banned or restricted according to breed, and dogs can be labeled as a breed based on physical appearance — not actual breed or lineage.]

I am not aware of any law or business practice that requires shelters to make breed guesses when information to support their guesses is not available.

I don’t regret adopting Fannie, and since I thought she was a Rottie mix I was prepared to encounter discrimination. But now that I know she’s not, I resent having wasted so much money on the shelter’s guess, which turned out to be wrong.

I wish the shelter had left the breed category blank, or at least listed “mixed breed.” It would have been more honest and more accurate. And it would have saved us a lot of money and stress.